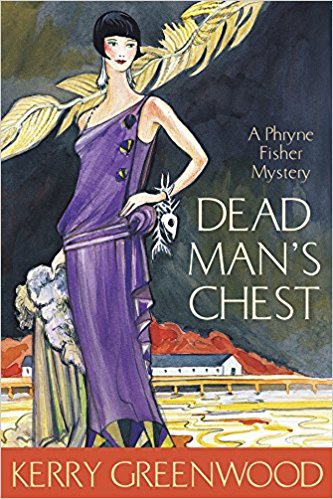 eBook Obtained By: ARC from NetGalley, in exchange for an honest review

My Chocolate Rating on Scale of 5: 3 Reese’s Peanut-Butter Eggs, Hearts, or Trees (stick-to-your-ribs good)—see below, take with a cup of coffee for my reading bias

From the Amazon description

“Dot unfolded the note. “He says that his married couple will look after the divine Miss Fisher…I’ll leave out a bit…their name is Johnson and they seem very reliable.” Phryne got the door open at last. She stepped into the hall. “I think he was mistaken about that,” she commented.

Traveling at high speed in her beloved Hispano-Suiza accompanied by her maid and trusted companion Dot, her two adoptive daughters Jane and Ruth, and their dog Molly, The Hon. Miss Phryne Fisher is off to Queenscliff. She’d promised everyone a nice holiday by the sea with absolutely no murders, but when they arrive at their rented accommodation that doesn’t seem likely at all.

An empty house, a gang of teenage louts, a fisherboy saved, and the mystery of a missing butler and his wife seem to lead inexorably toward a hunt for buried treasure by the sea. But what information might the curious Surrealists be able to contribute? Phryne knows to what depths people will sink for greed, but with a glass of champagne in one hand and a pearl-handled Beretta in the other, no one is getting past her.”

With its omniscient viewpoint (even from the dog) and slow-paced opening, this book varies from what I usually read. I had jumped at the chance for the ARC (advance reader copy) because I loved the three-season series about the “lady detective” living in Australia in the 1920s but hadn’t yet read any of Greenwood’s books. This sounded like an episode I’d seen, so it would provide a chance to appreciate the author’s original works while I tried to ignore the direction the TV episode took—I looked forward to more subplots, and the book did not disappoint in that regard.

The mystery hits fast, with the holiday home Phryne and company stay at in a shambles, and the husband and wife who should be running the household are missing.  The lazy opening pace surprised me, but I suppose reflects that Phryne is on holiday. With her usual ingenuity, she gets the house humming, then balances holiday with solving the mystery.  The head-hopping took me a good three chapters to get used to. I’d have put the book down by then, but I’d made a commitment as an ARC reader, and even if I was starting it a month later than I should have, I was giving it a chance. I did enjoy the characters. If I hadn’t, I would have given it a DNF.

Somewhere about chapter five I got into the book more, appreciating it as a slice of history (an aspect I love so much about the TV series). I cringe (in a good way) as a stench emanates from a hair salon:  “‘It’s those marcel irons,’ said Phryne. ‘If you want hair like corrugated iron, you need to discipline it very severely.’”

I kept reading because of the characters.  I enjoyed watching Ruth come into her own as she worked towards a dream she had; I already knew book-loving, fast-witted Jane would give as good as she got. Who but a bookworm must admit, about their unconventional bookmark rather than dog-earing a corner, “Nothing seemed available except the lettuce.” And when it comes to Phryne standing up for herself, never needing a man to rescue her, of course Greenwood gave me ample reason to cheer. I can well believe this reaction by one of the bad guys: “She looked just like a Dutch doll, pink lips, bright eyes, white skin, black shiny hair. But she didn’t sound like any doll. Phryne Fisher gave [I’m cutting the name] the willies.”

Greenwood walks into the mystery casually, as Phryne investigates and uses her family and some of the locals a’la Holmes’ Baker Street Irregulars. The cast of characters rounded out nicely, deepening the slice of life as the mystery got going. The new characters had their own arcs, as did the existing characters, deepening the story. The inclusion of a half dozen Surrealists, provided laughable moments, even if they did slow the pace.

At the end of the novel, Greenwood tied together threads of the plot nicely, playing on characters strengths and weaknesses. It’s a book that satisfies.

Take my 3-chocolate rating with a cup of coffee, as I don’t read a lot of mysteries, and I don’t read a lot of omniscient POV.  That head-hopping and all the filtering words “Phryne heard” or “Dot saw” or “Ruth felt” pushed me out of the story regularly. Language wise, Greenwood painted great descriptions.  Phryne, never one to let a wrong go un-righted, says, “ ‘And boys, I’m going to be here for weeks, and if I see any of you so much as look sideways at an innocent man, woman, child or dog, expect retribution to set in with unusual accuracy and force. You hear me?’ ”

If you like mysteries or historicals, give Miss Fisher’s Mysteries a read.