When I was younger, I spent my share of afternoons in Dad’s shop. I loaded two parts, told the machine to start, and watched the weld against an indicator for centering. Always using my gloved hand to protect me from the heat, I set the finished piece in the shipping basket or tossed it into the “rejects” pile for Dad to fix. When a pattern of failures developed, I’d holler for him to make adjustments.

I had no appreciation for the work Dad did out of my sight. He wore a helmet most times, protecting him from the intensity of the light and the uv rays that would otherwise blind him. Dad’s shop was where I learned about “the right tool for the job.”

Roughly a year and a half ago, I broke spot welds on my mowing tractor, where a hinge connected hood to body. Mowing became the art of steering with one hand and holding down the wildly bouncing right side of the hood with the other. Between the ravine, the creek, and all my trees, plus manual shifting needing a third hand I couldn’t will into being, mowing time increased. I thought maybe I’d drill a hole through the tractor hood, then use a bolt to secure the two pieces, but I never got around to buying the drill bit I thought I’d need. Besides, it was just one broken part. 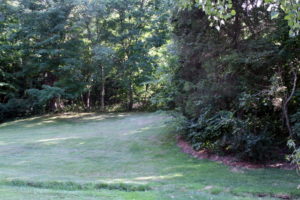 This hill is steeper than it looks, especially going downhill towards the creek.

A year ago, that compromised hinge bar broke in half. Now I really had my work cut out, holding the hood in place. Those times I’d get distracted steering the steep downhill, my tractor’s hood would reach the creek before the tractor did.

That first time it happened, the wires supplying electricity to the headlights stretched across the hot muffler a few seconds too long. I drove through the distinct odor of melting plastic until the ground leveled out and I could stop. I wouldn’t be using the headlights any time soon. So I could finish mowing, I tied the singed wires around the closest thing that would work—the throttle lever.

A day later, I surveyed the line of epoxies at a big-box store and picked one claiming to be ”strong as steel.” I spent more time mixing the epoxy than the epoxy actually held the pieces together.

One steamy mowing, as I paralleled the roadway, I saw something and thought, “A car lost its cable housing. That looks just like the stuff on my tractor…. Oh, crap.” Yep, the jury-rigged wires had untied themselves. Now that I’d mowed over them, they’d never connect to the headlights unless I spliced them with other wire. Make that headlight. I’d lost one of the bulbs, and I couldn’t find it.

One broken part had blossomed to five. I wasn’t willing to see what number six would be. After pricing out cheap welding equipment at that same big-box store, I called home to talk about my idea. Dad compared my years of writing to his years of welding. Sure, I was angling for the right tool after that mis-step with the epoxy, but some tools require more skill than others.

A week later, Dad gave up his morning for a trip into his shop. As Dad adjusted the flow of the four-foot-tall tanks of gas, he explained he needed to tweak the ratio of oxygen to, I think, argon, so the flame would burn hot enough to remove the paint and epoxy remains without melting the metal. Then it was over to the grinder, working on the rod ends until he had clean edges.

I love watching Dad pull a problem apart to find its root cause and design a solution. I’d made things worse through delay—the longer a problem festers, the harder to fix. He’d taught me that during his years of repairing my cars, but I’d ignored those lessons as my tractor ailed. Instead, I’d envisioned how I’d save time if I invested in a zero-turn model.

Dad debunked my theory that it was the pounding of the caved-in mole tunnels in my yard that had caused my first failure. “Think about all those RPMs from the engine,” he said. “How old is the tractor?” Eighteen years of engine vibrations, rattling every nut, bolt, and weld.

After he verified I hadn’t compromised the integrity of the bar—other than where I’d broken it in half—he engineered his solution, including longer, stronger welds. As a bonus, he’d also fix the fatigue cracks he found in the hood. 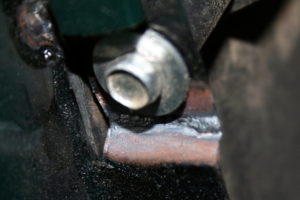 Sure, it bolts together. But if you leave the fatigue crack alone…

Tools came out, from c-clamps to a hammer and blocks of wood. With one quick “tack” weld to temporarily start the fix, Dad double-checked alignments. After all, the plastic grill plate with headlights needed to fit when he was done. Bolt holes aligned.

Dad reached for his helmet. It was time to sit my butt down.

“Would you like to see the welding up close?” he asked.

Minutes later, protected behind my very own helmet, I leaned over. Um, why was the whole world dark? I flipped up my helmet, wondering if I’d stepped through a rift in the space-time continuum.

“Helmet down.” Dad was ready to work.

I leaned as close as I could without getting in his way. A blip of intense light.

My questions disappeared into the fluorescent light as we lifted our hoods.

And so it went, weld by weld, with Dad explaining what he was doing, why he was doing it. Helmets flipped down. A pinprick of white-blue light lasting a second here, two seconds there.

Was Dad’s target really visible from that itty-bitty light? 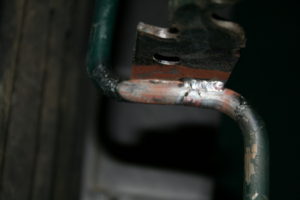 Metal fills what dad ground out, with a bonus side weld for strength

He explained his proximity helped him see better than I would at my distance, but, yes, indeed, it took practice learning to see, to weld, to steady his hand, to pick the right welding wire for the job. And don’t forget grounding the torch, and setting the ratios of gas canisters….

I walked out of the shop with a glimmer of understanding of what my dad does. My dad, always helping me, always teaching me.

2 Responses to What Dad Sees