NYCM SSC Round 2, Here I Come!

This is my third year participating in the New York City Midnight Short Story Challenge. Random luck packages us with other writers in heats, where each heat has its own prompts that drop at midnight. Writing across the 8 days we had for round one, I crafted my political satire (my assigned genre) about grannies baking plastic guns (guns being the assigned subject) as the beginning of the revolution against a government bent on over-protectionism—making my grannies the middleman (my assigned character). For  insight into the whirlwind of round one, you can catch up through my previous post.

Just as prompts drop at midnight, results are announced at midnight. Working a day job and all, I didn’t stay up for it yesterday. When I logged on this morning immediately after getting up, I thrilled to seeing I’d again secured a spot—fourth place in my heat of 31. Maybe that’s not as high as my placings last year, but you know what? I’m still in! From 3031, we’ve been culled to 500. 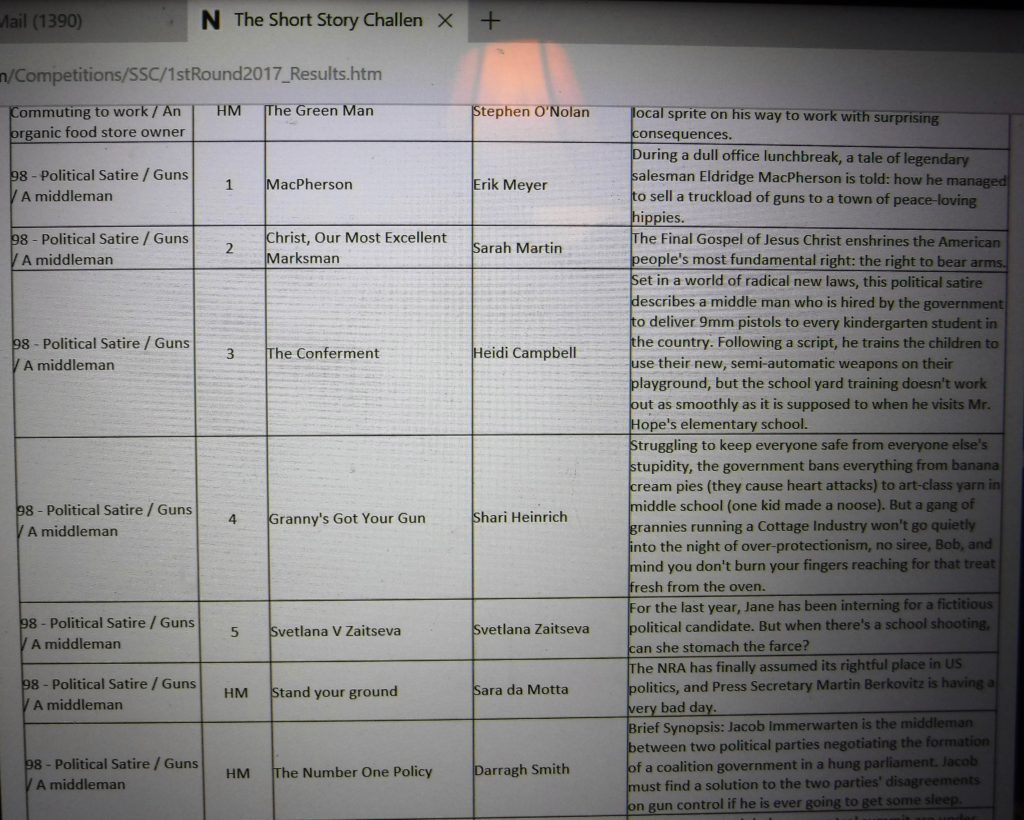 Results are in – I’m through to the next round.

As Thursday night hits the witching hour, our Round 2 prompts drop. We’ll have 72 hours to craft our story of no more than 2,000 words. We’ll see how NYCM parses us into heats, and what combinations we draw. With my mantra of “not horror, not horror, not horror,” I have little doubt about the genre I’ll draw—given that in my past rounds when I’ve desired not to get a genre, I’ve nailed it or the one I’m only marginally less afraid of getting (Romantic-Comedy; Romance, and now Political Satire).

Then again, my track record’s standing strong between last year’s competition and this first round this year: when I don’t want a genre but still land it, I’m pushed out of my comfort zone. I’m mentally gearing up for the intensity of genre research, then scratching out three ideas, all of which I’ll discard; and that fourth idea? I’ll frantically IM writer friends and get them to “beta” my concept: basically, give it a thumbs up or thumbs down; toss some ideas into the mix, too, if they have them. Then it’s up to my brain to swirl my prompts together into a short story I can hang my hopes upon. Hours of work I’ll refuse to count—because when I write, time runs away from me in the pursuit of that piece that’ll entertain my reader.

I end tonight wishing my Round 2 SSC competitors inspiration (but I’m hoping I score even more inspiration), fantastic betas (a tad less talented than my friends), and enough hours in the day to get shuteye (even when I’m competitive, I’m not going to wish lack of sleep on anyone … though maybe I’m wishing my competitors a tad more shuteye if it’ll steal from their writing time. Yeah, I’m devious like that).

That said, I do wish my online writer friends the absolute best writing jags. Without their help, each of my pieces would have fallen short of moving me forward. But I’ve got my fingers crossed we won’t be in the same heats—not until that final round. The more of us who move forward, the higher the chance one of us will stand atop the final podium.

In the meantime, I’m celebrating this writing success. In our business, rejection comes at a far greater rate than the victories. As my energy flags in Round 2, I’ll remind myself, only through hard work will I be proud of my results. Thank you, NYCM SSC, for offering this type of writing contest, and pushing me out of my comfort zone.