Book Review: Magic in the Shadows 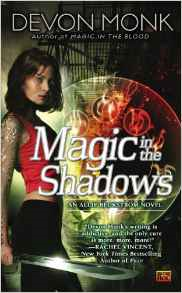 “Using magic wasn’t as easy as the actors made it look in the movies. Every time you use magic, it uses you back. Sure, you could magic yourself a photographic memory for that big test, for that big interview, for that big stock market job. And all it cost you was a nice case of liver failure. Or the memory of your lover’s name.”

“Magic is Allison Beckstrom’s blessing and curse. As a Hound, she uses her gifts to track down practitioners who abuse their power, and then stops them from inflicting harm on unsuspecting innocents. Unfortunately, her spells have taken a toll on her, physically marking her and erasing her memories—including those of the man she supposedly loves.

But lost memories aren’t the only things praying on Allie’s thoughts. Her late father, the prominent businessman—and sorcerer, Daniel Beckstrom—has somehow channeled himself into her mind. With the help of the Authority, a secret organization of magic users, she hopes to gain better control over her own abilities—and find a way to deal with her father….”

Magic in the Shadows (ROC, 2009) is book 3 of Devon Monk’s urban fantasy series about Hound Allie Beckstrom. It picks up her story up immediately after the conclusion of book 2. Monk does a lot of quick summaries of the major action in book 2, so you’d be able to jump into this story without having read books 1 and 2. That said, I think the experience of book 3 benefits from having felt what Allie put herself in book 2, trying to save her Hound friend and the abducted girls.

Monk deepens the magical roots of her re-imagined Seattle, where magic lives in lightning, flows through the ground. In this story you’ll learn more about how magic finally made its way into the public world, after years of being controlled by a select group of magic users. Now known as the Authority, they serve as the “government” of magic. If they don’t want it getting out, then the public won’t know about it.

Well, unless you’re Allie. Books 1 and 2 have left their mark on her, from the magical tattoos that help her channel her magic to the spirit realm attracted to her when she uses magic—the bits of magic users left behind, and ravenous for magic. It was bad enough when Allie battled memory loss as one of her frequent side effects of using magic; now she’s got to battle them.

Though the Authority has controlled magic, a battle’s brewing. Allie and her friends will be tromping through the middle of that battle as they track the most recent crime disturbing Seattle. With her powers growing, when she taps them, and fighting the Influence of her father in her head, Allie needs help, as hard as that is for this independent woman to admit.

She still calls it like she sees it, and can’t help being curious about magic—like the spelled gargoyles at the hoity-toity restaurant her lover, Zayvion, takes her to for their first date. I love how Monk depicts the gargoyles, and Allie’s relationship with them.

As the designated mother hen for the other Hounds, Allie’s got her work cut out for her. Having inherited that from her deceased friend, she’s walking her own line. And if she wants to use her father’s money to do something good, well, he can sit down and shut up in her brain! That is, if the Authority can teach her to rid herself of him.

The pace clips along in the book, with Monk slowing down during the blossoming (slower, maybe) relationship scenes between Allie and Zay. But this book still has steamy sex scenes when the two get together.

When Monk introduces new characters, I love how she can characterize them through the scents that Allie traces to them as part of her Hound sensitivity to smell. Weaving in bits of backstory as needed, creating characters with attitude, I admire Monk’s world building. I’m fully invested in her characters, and this series.