Book Review: Magic at the Gate

Posted on October 5, 2017 by shariheinrich 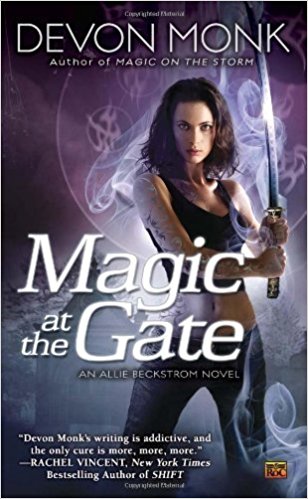 Cover Design, no attribution given

Book Obtained By: Christmas gift because I loved her first books in the series and asked for the rest.

Allison Beckstrom is a Hound: She uses her magic to find unscrupulous magicians and stop them from harming innocents with their power. But every time she casts a spell, she places her mind, body, and soul at the mercy of magic, which uses her as much as she uses it….

Allie’s lover, Zayvion Jones, is a guardian of the gates, imbued with both light and dark magic, and responsible for ensuring those energies don’t mix. But Zayvion lies in a coma, his soul trapped in death’s realm.

To rescue him, Allie must follow the specter of her deceitful late sorcerer father, Daniel Beckstrom, who is more than familiar with death’s domain. And when Allie discovers that the only way to save Zayvion is to sacrifice her very own magical essence, she makes a decision that may have grave consequences for the entire world….

Devon Monk hooked me with book one of the Allie Beckstrom series. I don’t give out a lot of “5s” in my reviews, but book five earned it. Allie, as a first-person character, has a delightfully snarky inner monologue. When handed an impossible choice, she thinks through her options; if she’s going the magical route, I hope she’ll remember to set her disbursement so that she controls the consequences of the magic—headache, worse headache, migraine, head cold, you name it. She’ll tough through it, saying things like “I stood. Me and anger went way back. It kept me steady and strong even though the room swayed a little to the left” (p. 102).

She’s a kick-butt character with the attitude to match, but the frequent uncertainty we women often face in second-guessing our decisions when other voices dominate the conversation. When she makes her decision, watch out. “Reason. Like that would stop me” (p. 106).

SPOILER from earlier books: If you haven’t read the other Allie Beckstrom books, move along to the next paragraph. Now, imagine that your dead father, Daniel, has taken up residence in your head and refuses to move along to the afterlife. He loves to second-guess Allie, and she can’t trust him. Her father has seemingly one interest in mind: his own. Sometimes I laugh, sometimes I scream in frustration at what her father’s putting her through. Monk has me hooked, all right. Oh, yes, and imagine that your boyfriend’s body is still alive, but his soul has been pulled through the gates of Death. And your dead father convinces you he’s the only hope you have of bringing that soul back to reunite it with the body. Can you say unscrupulous hidden agenda on his part?

Pacing flew in this book. It gets my highest rating because:

No doubt about it, this book pulled me in more deeply than any of the others.

Throughout the book, even when the pace slowed, I did not want to skip paragraphs to move ahead. That’s big for me, because I’m a slow reader. There are times I skim paragraphs, but I didn’t in this book. Prose seemed tighter than the previous book, with fewer instance of the words that push me out, like “I smelled” or “I tasted.” But when they were used, like, “tasted,” I accepted as in-character of a Hound. Allie’s job, as a Hound, is to sniff out the source of magic when the caster “offloaded” the pain price to someone else. She smells and tastes a lot.

The cast of characters comes together well.  A hound may be a loner by trade, but mix in the Authority that has controlled magic up to now, and there are other heavy hitters in the mix. In a world of chaos, and the betrayals of book four, Allie’s instincts are in overdrive trying to decide who to trust, who to fear. She’s never trusted her father, often feared him, but in this book, she sees a different dimension of him that makes me question if he’s got her interests in mind, too; or is he the same old (bad word) who cannot redeem himself?

Oh, and her memories—with her swiss-cheese holes from previous magical costs, when she recovers a memory, I can’t wait to see where it leads her in this book or another. Monk unveiled two gems in this book.

I’m along for the ride, hoping that characters I love, like inn owner Maeve and her son, Shame, will continue to hold true to magic’s best interests. And until the end, I’m squirming, waiting to see if she has saved Zayvion (Zay) from the horrors of death. And wondering, too, where the next books will lead. Characters don’t always survive battles, and Monk’s made me care about Maeve, Shame; her dad’s pregnant wife Violet; Zay; the hounds, like Davey; detective Stotts . . . see, I’m invested in these characters.

If you enjoy urban fantasy, a touch of romance, and a female character who fights tooth and nail for what she believes in, who’s ready to shoulder the price of magic, then make time for Magic at the Gate.