Posted on September 28, 2017 by shariheinrich 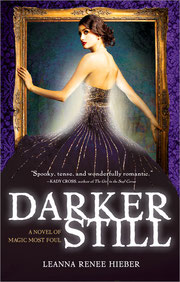 Book Obtained By: Purchased from author after talking with her at the spring 2017 Ohioana Book Festival in Columbus, Ohio.

My Chocolate Rating on Scale of 5: 4.0 Ghirardelli Salty Caramels (just shy of perfection)

It was as if he called to me, demanding I reach out and touch the brushstrokes of color swirled onto the canvas. It was the most exquisite portrait I’d ever seen—everything about Lord Denbury was unbelievable… utterly breathtaking and eerily lifelike.

There was a reason for that. Because despite what everyone said, Denbury never had committed suicide. He was alive. Trapped within his golden frame.

I’ve crossed over into his world within the painting, and I’ve seen what dreams haunt him. They haunt me, too. He and I are inextricably linked—bound together to watch the darkness seeping through the gas-lit cobblestone streets of Manhattan. And unless I can free him soon, things will only get Darker Still.”

Leanna Renee Hieber attended the 2017 Ohioana Book Festival, presenting on a panel as well as having a table in the huge room of more than one hundred authors. I’d meant to go to her panel, then decide if I wanted to buy a book—with so many local choices, and a limited wallet, I wanted to “pay back” to authors presenting when their works fit my reading tastes.

But Leanna’s outfit caught my eye two hours before her panel. She’d dressed in a period costume of early nineteen hundreds, trim lines of buttons down the full length dress, white gloves, and ornate twist to her hair, secured with a ribbon. The covers of her books finished hauling me in.  Then she chatted with me about how The Picture of Dorian Grey had played an inspirational role in Darker Still and its sequel. She’d captured my interest—I love hearing other writers talk about their ideas, their process. Then I read the back cover; the first page. I bought the book.

Darker Still is written as the diary (or journal) of Miss Natalie Stewart, a mute teenager in a family with a degree of money to set them above most, but not at the top of the social ladder. True to Hieber’s description that she wanted to give voice and power to the females so often stripped of power in Victorian literature, she empowered Natalie with a keen intellect, curiosity, bravery, daring, and cunning. It could have been “too good to be true,” but Hieber balanced all of that with Natalie’s inability to talk.

From the “Gypsy” collection, turn of the century New York

With word choice and the rhythm of her words, Hieber built a Victorian Manhattan I believed. At times she let the city shine, and at others she painted the darkness, such as of the Five Points region, a perfect setting for the nefarious and occult doings around the painting that had drawn Natalie into its orbit.

The man trapped inside—will he be good or bad? With the horror occurring in the city, and Natalie’s dreams, will this man she’s attracted to prove to be good or bad? Even when I thought I knew, Hieber’s progression had me second-guessing myself.

The deeper into the story, the more the risk. Friendships develop, and rifts occur. All flow organically from the story. I never doubted what Natalie would risk to solve the mystery; but I did doubt friendships, wondering who would prove to be a true friend, and who would betray her.

The dark twists and turns paint that picture of an era where women were to be second class citizens, seen but not heard—all the more obvious with Natalie’s muteness. But lack of voice won’t force Natalie to keep her ideas to herself. Pen, paper, and gestures speak volumes.

If you enjoy horror, a tease of love and romance, the lure of magic, and a character who refuses to let society squash her individualism, grab Darker Still. 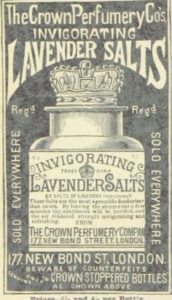