Book Review: A Promise of Fire

Posted on December 20, 2016 by shariheinrich 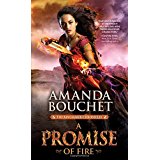 Cover Art from the book

Catalia “Cat” Fisa lives disguised as a soothsayer in a traveling circus. She is perfectly content avoiding the danger and destiny the Gods-and her homicidal mother-have saddled her with. That is, until Griffin, an ambitious warlord from the magic-deprived south, fixes her with his steely gaze and upsets her illusion of safety forever.

Griffin knows Cat is the Kingmaker, the woman who divines the truth through lies. He wants her as a powerful weapon for his newly conquered realm-until he realizes he wants her for much more than her magic. Cat fights him at every turn, but Griffin’s fairness, loyalty, and smoldering advances make him increasingly hard to resist and leave her wondering if life really does have to be short, and lived alone.

A Promise of fire is the debut novel by Amanda Bouchet. Cat would have been content living out her life in the circus, building a circle of friendships she never expected to have, but her sooth-saying act draws the attention of a warlord. Then one of the Greek Gods meddles: she knows better than to reveal secrets of her youth, yet when she reads the “future” of a young circus goer who desires the magic of the Magoi, she tells the boy where he might find a path to magic and gives away her first secret. The opening pages set the tone of the novel. Cat is hard on herself, protects herself, and runs from something she doesn’t ever want to face. Told in first-person present tense, the story invites you into every tormented discussion Cat has with herself about what she should or shouldn’t do. She’s protecting her heart, and you’ll have to read to find out why.

In the opening pages the warlord who watches her, Griffin, has the best interests of the kingdom in mind when he takes her away from her circus life, but he gives her no real choice when he presents his case to her. He’s a rare combination of intelligence, physical strength, and battle skills, making him a match for Cat and the survival skills she’s honed. And he’s ruthless when it comes to getting his way when he’s sure he knows best.

Bouchet did a fantastic job of dropping in the tidbits of Cat’s backstory as they were needed. For two reasons I’d be hard-pressed to say that she “info-dumped” anywhere: She built the perfect degree of mystery as Cat revealed those tidbits that explained her reactions, her fears, her abilities, letting the reader piece together the mystery long before Griffin does. Most times, I wanted more of that backstory, but the amount that Bouchet added didn’t interrupt the tension or the pacing of the story.

Her world-building is the same—she puts the information in scene, making me feel Cat drip with sweat in the desert setting, and long for the icy pools of her youth. The book balances descriptions of settings, characters, beasts, and enemies. I loved hearing character names I recognize from Greek mythology as Bouchet built the three major kingdoms I didn’t recognize (Sinta, Tarva, Fisa) and their power balances; then her original layer of Magoi (those with magic) and the Hoi Polloi (those without magic).

Cat speaks her mind regarding her predicament, every chance she gets, making her own case why Griffin is wrong. That provides fodder for the companions to lob back and forth as Bouchet develops the secondary characters—the warriors accompanying Griffin, building a company you can see, admire, and chastise for their role in Cat’s predicament. Bouchet made me care about them by showing me their interactions, their concerns, and hints of who they are as men and warriors. If anything, she made them a tad too nice, outside of their siding with Griffin over Cat. Everyone is single-mindedly convinced they know what’s right for her—and it is not fair to her. At all. As negative reviewers have said, these are the elements of rape culture. (I need this warning, so you can think about your sensitivities.)

If you love action along with your romance, you’ll fly through this book. Tension builds with each of the roadblocks and plot twists. Think about a few of the beasts from Greek mythology, then add in her version of a dragon, which I believe Bouchet created with the mythology as a base. The opportunities for battles abounded; and at each junction, Cat could make a choice to head back to her circus, support her friends, or turn on them. Those circus members mattered to me fast, too, because Bouchet showed me their magics, their acts, and how Cat interacted with them. I cared about them because she cared about them, dear as family.

With the first-person narration, the amount of “thinking” Cat does, you’re along for that ride as she battles who she is—from the days of her youth to the years of relative freedom she had with the circus, now stolen from her. She’s sharp-witted and emotionally honest with the readers, even when not with her companions. Cat feels like a reliable narrator. Once I know what she ran from, know her place in society, her behaviors make sense.

With a romance, well, sex is going to occur. Bouchet steams up the page as the longings grow between the characters. But even with those scenes, an emotional component keeps pace with the storyline. For a woman who expected to live her life alone, she’s got a lot of crap to get through. It makes the attraction easier to fight at times, but pushes her into fights with herself. She has to decide if it’s worth breaking free from the restrictions she’s placed upon herself.

Although the setting is ancient Greece, at times the language is modern. For example, one of Cat’s favorite expressions in her interior monologues is “gah!” which seems modern to me. Occasional other words jumped out at me. In the middle, “nerves” (I wondered when medicine came up with that) and towards the end, “tachycardia.” Then, the concept of “hours.” Sure, sun dials have been around forever, but that term? And “inches” as a measure. In the scheme of things, these were hiccups that did not cause me true grief; rather, as a writer pitching my own Greek mermaid story, they’re the same (potential) anachronisms I have to look up when it dawns one me I might have dropped in an anachronistic term when I didn’t mean to. I’m guessing most readers wouldn’t give any of them a second thought.

Cat made me laugh with her banter, her on-point observations, and some of the sillier battles with herself. With what Bouchet puts Cat through, she made me cry, cheer, cringe, and ultimately stay up later than I was supposed to one worknight. When Friday evening hit, I was staying up late until I finished the book, to the detriment of progress on the Christmas cards. I will have to read this book again. I stumbled on this book because I’d been doing my agent research, found the relatively new release by agent Jill Marsal, read a few of the “free” pages from Amazon, and then promptly hunted for the book at the library. I sat on the waiting list, then blazed through the book in a week—for me, that’s fast with everything else I normally do. Now that I’ve devoured the book, it goes into the “must add to my collection” list. Book two comes out January 3, 2017, with the third installment slated for fall of 2017.

Learn more about the next volume of Cat and Griffin’s story, A Breath of Fire, at the author’s webpage or the book page; or buy the book, as it contains the first chapter of A Breath of Fire. Find other reviews of A Promise of Fire at Amazon or your favorite book-review site. Find the author also on Facebook and Twitter.
This book has already stacked up the awards:

Have you read A Promise of Fire? What elements of it did you enjoy? Are you new to reading romances, like me, or have you been a long-time fan of the genre? What are some of the traits that call to you?

I’m always looking to find new authors in fantasy, and now paranormal romance or fantasy romance. If you’ve got a new book you’d recommend, add it to the comments. I thank you, and I’m sure my followers will thank you!