On Memorial Day, Remember Those Who Served and Died 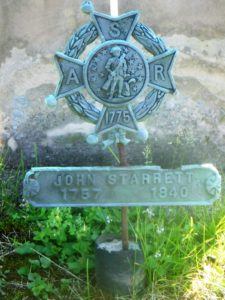 John Starrett, Veteran of the Revolution

Memorial Day, or Remembrance Day, is the time to remember those who lost their lives while serving our country. Too often, we see this weekend as the beginning of “summer,” when what it represents for military families is the end for someone they loved.

Big cities, small towns, and everything in between, they honor today with parades, members of the VFWs traveling in their cars, on motor cycles, on foot, waving to us. Or maybe it’s like in Gahanna today, where veterans fired their twenty-one gun salute from the bridge overlooking the river. A Gahanna High School band member played taps, while another echoed that taps from a distance. 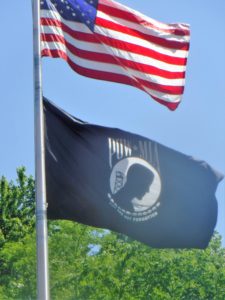 Missing in Action; Prisoner of War

We shoot our pictures, capturing the moments like the presentation of colors (our flag). I stood too far away to hear what was said, but that twenty-one-gun salute cracked through the air, the muzzles flashing. When the band prepared to march to the cemetery, the service members who gave the salute walked past me, and I thanked them for their service. I wondered which friends they’d give anything to see again. 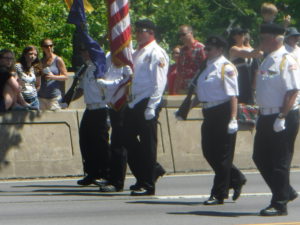 Presentation of Colors has concluded

I owe who I am, this lover of words, of nature, of the beauty of our country, to my parents who raised me, the school system, my friends. But I am also who I am because of those who fought, foreign and domestic. They paid this price for me without my asking, sacrificing time with their loved ones, the career they intended; they came back whole or scarred, whether visible injuries or not. Too many have come home in a coffin draped with the American flag. I owe every one of them.

On this Memorial Day, please think of those who served and are no longer here. Send a prayer out to them, their families, their descendants. 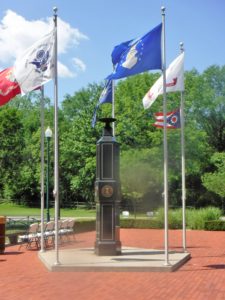 stories we don’t learn in school can be the most telling of the history of war. Was it fought for freedom? To keep power? To wrest power away from a megalomaniac like Hitler? Ironic how in the very fight for freedom, some are denied the chance to serve, as if this country did not belong to them, too. Those denials hint at the way power too often sits on the backs of inequality.

Have you heard of the Tuskegee Airmen? They were an experiment during World War II to determine if African Americans “had the mental and physical capabilities to lead, fly military aircraft, and the courage to fight in war.” (Source, the URL above). 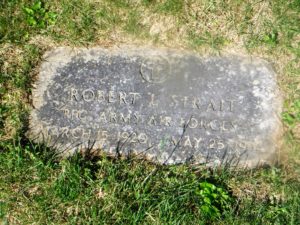 I had heard of the Tuskegee Airmen, but I hadn’t realized a host of military personnel formed it—from the folks who cooked and cleaned to the navigators, parachute riggers, mechanics, all the way up to the pilots; nor had I known it was an experiment. I owe them my freedom as much as I own any other service member.

Then there were the women pilots, not seeing airtime until WWII as well. The attack on Pearl Harbor, December 7, 1941, caught the United States by surprise. Without enough male pilots to both be in the war and serve in domestic capacities, twenty-eight women aviators took to the sky to deliver aircraft to the flight schools, forming the first female squadron, even as “Rosie the Riviter” encouraged women to work in the factories, 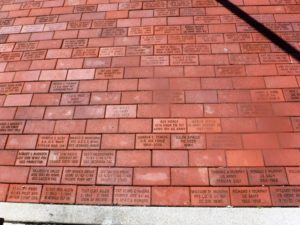 Pilots Nancy Love and Jacqueline Cochran formed the two programs that eventually became known as the Women Airforce Service Pilots (WASP). Their duties expanded, and by war’s end they transported personnel, flight-tested aircraft after they’d been repaired, towed targets, and more. From those 28 women, they grew to a corps that served at more than 120 bases in the states.

But wait, did I mention—they did this all as volunteers? That’s right, they were not recognized as members of the military. In June of 1944, Army Air Forces Commanding General “Hap” Arnold asked Congress to recognize the WASP as members of the US military.

The 1,102 women who served in WASP did not receive that recognition until President Carter in 1977.

On this Memorial Day, I hope you’ll take a moment to bow your head in silence, and thank those who have lost their lives in the pursuit of our freedom. 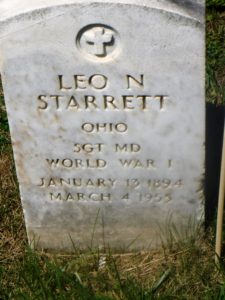 This entry was posted in Giving Thanks, Holidays and tagged holiday, Memorial Day, Respect, War. Bookmark the permalink.