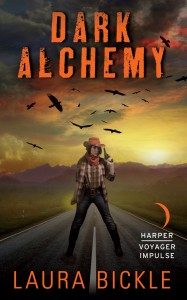 My Chocolate Rating on Scale of 5: 4 Ghiradelli Salty Caramels (just shy of perfection)

“Some secrets are better left buried…

“Geologist Petra Dee arrives in Wyoming seeking clues to her father’s disappearance years ago. What she finds instead is Temperance, a dying western town with a gold rush past and a meth-infested present. But under the dust and quiet, an old power is shifting. When bodies start turning up—desiccated and twisted skeletons that Petra can’t scientifically explain—her investigations land her in the middle of a covert war between the town’s most powerful interests. Petra’s father wasn’t the only one searching for the alchemical secrets of Temperance, and those still looking are now ready to kill. Armed with nothing but shaky alliances, a pair of antique guns, and a relic she doesn’t understand, the only thing Petra knows for sure is that she and her coyote sidekick are going to have to move fast—or die next.”

Bickle tells this tale in third person, alternating point of view (POV) primarily between Petra and one of Sal Rutherford’s ranch hands, Gabe; then a peripheral character, Cal, and one of the power brokers in Temperance, Stroud. Since I read this over the period of a few weeks, I may have forgotten a lesser-used POV. Bickle didn’t head-hop—bouncing around fast in POVs. I appreciate authors who stick in a point of view and give clear breaks (like a section break or chapter break) before shifting the POV. The story line rocks, pun fully intended, for this geologist set to discover what happened to her father some twenty years ago.

If you enjoy mystery and discovery in your urban fantasy (or contemporary fantasy, as this was named), join Petra as she tries to unearth the clues about her father’s disappearance. Temperance holds more mysteries than the denizens let on. Then there’s Petra’s own backstory, which Bickle weaves in as part of a subplot—why she chosen now to search for her missing father, some nineteen years (I think it was) after the fact. Loss haunts Petra.

Bickle builds Petra as a character capable of taking care of herself, so Petra’s actions make sense as Bickle raises the stakes with incidents growing in violence and danger. The subplot (around why now) dovetails nicely with these incidents. As a scientist, Petra’s analytical way of looking at problems means she’s not prone to jumping to conclusions or accepting anything at face value. This gives Bickle loads of room for Petra to engineer solutions for study while she waits for her geological tools to arrive. Then, when she unboxes the first shipment, her arsenal grows. Likewise, when the danger grows, Bickle keeps Petra in character. If science can’t get her out of it, then her strong will might.

One of the more interesting sets of characters in here, Maria Yellowrose and her alcoholic uncle Frankie, wind through the book, keeping Petra from being stuck in her head too much; add a hint of the shaman in Frankie, and you’ve got more mysteries and clues. If Petra’s to fit into Temperance, then she needs connected friends, and maybe an occult connection might tip the scales towards her. And a coyote familiar. She definitely needs a coyote familiar to lend her a paw now and then.

Another of Bickle’s strengths, natural imagery, grounds you in the Yellowstone Park region. When the alchemical dimension builds, prepare to be wowed by those descriptions. Bickle weaves her research into the book so that I’m not overwhelmed with knowledge. It fits the character, the town, the history. Piece by piece, the reader puts the puzzle together along with Petra.

Part of the reason I dithered between rating it 3.5 and 4 is one of those filtering tendencies I’ve tried so hard to work out of my own writing—and maybe it wouldn’t bother me if it weren’t one of my bugaboos. Filtering words or phrases push me out of a narrative because they break my willing suspension of disbelief. While I can’t say that every page had these breaks, some pages had multiple occurrences, even repeating the filtering word. Take these examples:

If you’re looking for your next urban fantasy, why not take a look at this cousin, contemporary fantasy? Bickle paints a believable western town, population probably something like two hundred, and plops Petra in the middle of a centuries old mystery that well exceeds her hunt for her father. If you enjoy this book, you might like Bickle’s additional books in this trilogy about Petra Dee.

Nine of Stars, book one of the Wildlands series, continues the adventures of geologist Petra Dee as she explores Temperance’s alchemical roots, now braving winter.

Or, look up her young adult books, under her pen name Alayna Williams.